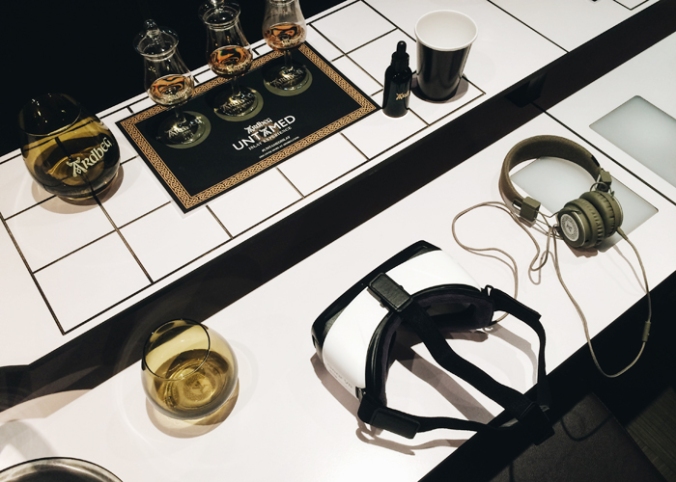 Happy Whisky Wednesday y’all! On my second day back in NYC, I got to attend the first ever Ardbeg Night which included the release of their newest expression: Dark Cove.

Ohhhhhhh, spooky! You may be thinking, “Home Bar Gurrrl, were you scared?” Heck no! Though our surroundings were dark, filled with technology, and a bit on the mystical side, I was fortified with delicious peated Whisky!

As usual, we’re going to do this photo essay style. All pics taken with my lil iPhone 5S. 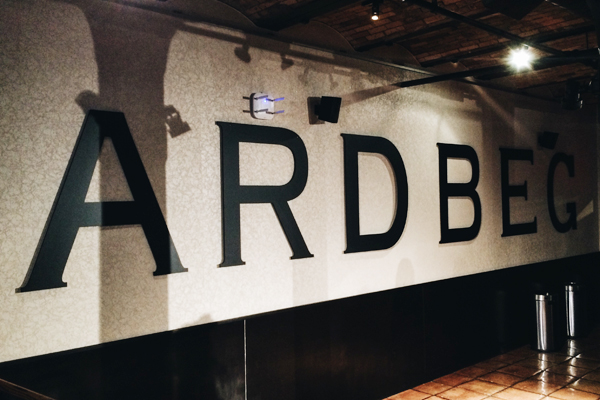 I arrived at the Astor Center in Manhattan to a decked out room full of ARDBEG! Ardbeg Night was created as part of the Feis Ile, aka the Festival of Islay that happens each year at the end of May. Each of the big distilleries on the island gets to have a day during the festival, with Ardbeg’s happening on the last day. To celebrate here in the states, they created Ardbeg Night as a party for the Ardbeg Committee.

The evening’s guests were just beginning to arrive and we were being served tasty bites and drams of Whisky.

I was ushered straight to the bar where a kind and informative lady poured me some Ardbeg 10. Hearty stuff for sure! This is a really killer entry level peated Scotch with all sorts of fabulous notes like…

Ardbeg 10: Caramel, smoked fruit, lemon, lime, chocolate, sea spray/salt, brine, vanilla, coffee, and a bit of that “medicinal iodine” flavor that I love so much in Scotch. The other thing that struck me was this was kind of funky, like if you combined Rhum Agricole and Mezcal but then it was actually Whisky. I was totally into it!

Then it was time for the tasting which included all three Ardbeg expressions and an Occulus VR video from Ardbeg Distillery and the isle of Islay to accompany each glass. So cool! 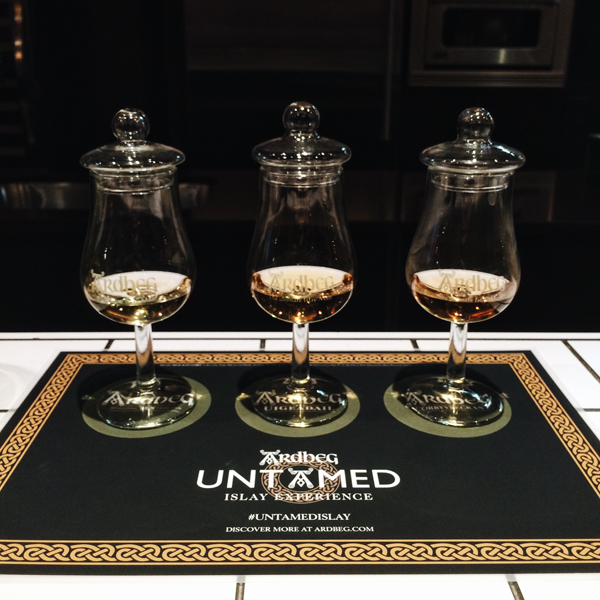 From Left to Right: Ardbeg 10, Uigeadail, and Corryvreckan. Since I’ve already described Ardbeg 10, I’ll give brief tasting notes on the other two.

Uigeadail: big and smokey but more like BBQ bacon smoke, I noticed the flavors were more focused than the 10 Year. Earthy notes of leather, tobacco, coal, firey smoke. Then came notes of grains, caramel, more heat, orange peel, chocolate, toffee, dark fruits. It was matured in ex-Bourbon and Oloroso Sherry casks. 50/50 split on the aging for 8-12 years, then married and bottled at 52.54%.

Corryvreckan: Fresh and clean with lots of herbal notes like briney seaweed, rosemary, fennel, licorice, and freshly cut grasses. Then came the deeper notes of coal, smoked wood, peat, pepper, and vanilla. This Whisky actually has the most ppm of smoke but it takes a back seat to all the glorious herbes. Add water and Corryvreckan smells like you’ve doused a fire. Really unique. Cask strength at 57.1%, matured in new French oak. 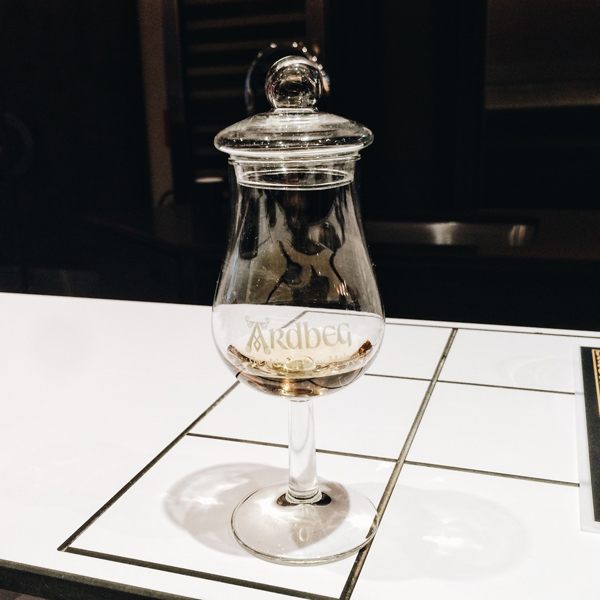 We were all happy with our three drams, but then Ardbeg surprised us and brought out tastings of their newest expression, Dark Cove. You may be looking at the above photo and thinking, “where is the Darkness in this Dark Cove cause that looks like a really light Whisky.” Haha, yep, but you should feel good about the color because Ardbeg doesn’t add any additives or color to their Whiskies.

Dark Cove was aged in something called Black Sherry casks, which is a type of Sherry that is thicker, more viscous, and blacker than Pedro Ximénez and incidentally, isn’t sold any more. Dr. Bill Lumsden and the Ardbeg gents had to find someone who was making Black Sherry casks, then got to work on the balance of the Whisky. At first they tried aging new make spirit exclusively in these casks but it wasn’t quite right. Then Dr. Bill decided to blend the Black Sherry aged Whisky with Ardbeg 10 and something really tasty was born.

Dark Cove: Tricole notes (molasses + toffee), over done brisket, meaty, thick, lots of umami, smoke, iodine, band-aid, squid ink, fish sauce.  With all these heavy notes, somehow the palate was really clean and smooth. Dark Cove is definitely a very umami focused Whisky, but is very pleasant and kept me coming back for more. I happily had 3-4 drams of it throughout the night.

Our tasting was done, and it was time for the Ardbeg Committee members to try Dark Cove. Parrrrty! 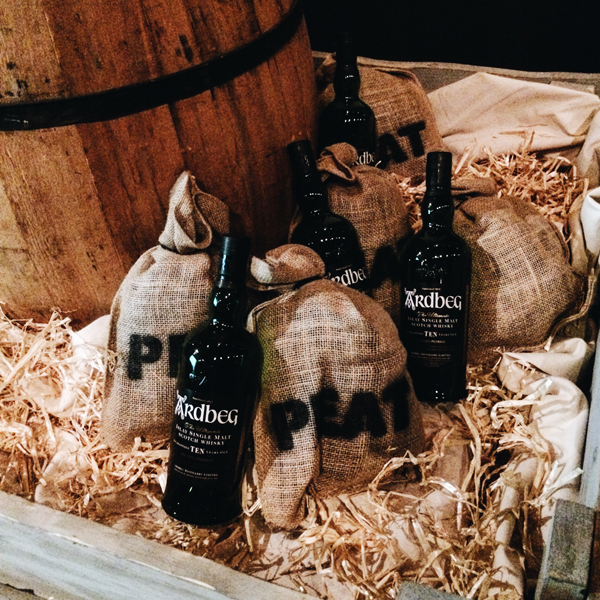 Ardbeg 10 and bags of Peat.

Oh! There was a dog motif happening at the party too. Shortie is the Ardbeg mascot and he appeared all over Astor Center.

Here he is again, complete with a crown. Adorable.

There was also a VR station for the Committee members so they could enjoy a tour of the distillery whilst sipping Dark Cove. 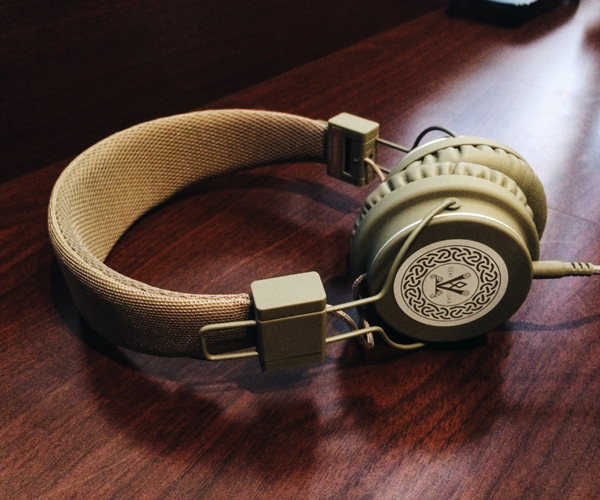 Lastly, our host Brendan McCarron (the 2nd in command at Ardbeg) wearing a big black cloak (Dark Cove = Dark Cloak) and thanking everyone for coming to Ardbeg Night. Sláinte!

Thanks to The Baddish Group for inviting me to this fabulous event!